This interview was published in the Dutch weekly De Groene Amsterdammer in March 2008, after Baeke’s collection Groter dan de feiten (Larger than the Facts, 2007) was nominated for the VSB Poetry Prize 2008.

Jan Baeke (1956) is a poet and translator whose first collection of poetry Nooit zonder de paarden (Never without the Horses) appeared in 1997. His collection Zo is de zee (That is the Sea) was published in 2001, and Iedereen is er (Everyone’s Here) in 2004. Baeke has translated poems by Deryn Rees-Jones and work by Liz Lochhead and Lavinia Greenlaw. He publishes in literary magazines, including Raster, Tirade, DWB, De zingende zaag, De poëziekrant, and Het liegend konijn.

Besides being an author, Baeke also works at the Film Museum in Amsterdam, for which he conceived and realised the programme 35 mmPOEM, a series of productions in which silent film and live poetry are combined. The collection of poems now nominated is called Groter dan de feiten (Larger that the Facts), and it consists of five sections that jointly form a narrative – if you view the work from a distance. There are two characters in a hotel, they love one another, they go out, they miss one another. Tension mounts in the last section: a name is sought on lists, a loss is mourned. Despite this structure, which evokes a certain intrigue, the poems are autonomous.

Jan Baeke: I began by writing a number of poems, just as I always do. Initially, I thought that it might be possible to generate a cycle, due to the recurrence of certain elements. Then I saw two characters arise. I began to think about these characters: what kind of people are they, what motives do they have? So a sort of narrative appeared, even if it isn’t explicitly elaborated. There’s a man, there’s a woman. They have a certain relationship with one another, they may share a past, and they separate at a certain moment. What brought them together and what pushed them apart? I found it interesting to investigate that.

Wasn’t the storyline too dominant when you were writing the poems?
Because I didn’t really know in advance where the narrative would take me – after all, I was writing on the basis of only a few ingredients – it wasn’t too much of a problem. I started with a person who has departed from a place that embraces a great deal of his past, and is now somewhere else. Subsequently, I wrote as many poems as possible to see which story would arise from this situation.

Because it was essential to devote most of my effort to creating the poems, I only began to knit the material together in the final stages. I checked whether or not there was something missing in the development of a certain character, for example, and whether the way the characters were related to one another was credible.

The man and the woman in the story love one another, there is warmth and love. Nevertheless, their love breaks down. What was your message here?
That love is seldom successful. People apparently find it difficult to be together and stay together. On the other hand, we are drawn to one another. It is a theme that has always interested me: what keeps people together, what drives them apart? What do people expect from life, or to put it more abstractly: what do people expect from reality and how does the relationship with the other person fit into this reality? My poetry often deals with a person who has a relationship with another person. I never retreat into the cocoon of the self. It is always the relationship with the other that fascinates me.

In your poetry, you write about language in relationship to reality. What role does language play in our perception?
Perception and language influence each other. Language is a means of gaining a hold on perceived reality. Seeing induces questions: what am I seeing, how does it affect me, does it mean anything, is there more to it than I can perceive right now? By talking, my characters attempt to find answers to such questions. To them, thinking begins at the tip of the tongue.

Certain elements recur in the collection: cigarettes, fire, smoke, a canary. How are these language elements related to reality?
Language in a poem often has an independent quality and, moreover, evokes thoughts that you could regard as perception. It is a strange kind of wickerwork: you write about something, but the act of writing also generates a certain interweaving of ideas, pictures and questions. Those cigarettes and that fire, they simply appear out of the blue. Then I react to these and this response becomes a part of the story. A canary plays a major role in one of my poems. This is an image I picked up when I stayed in a hotel where a canary cage hung in the inner courtyard. It began to play a role in my poems and suddenly acquired far-reaching significance in the perception of one of the characters.

You are also inspired by film. How does that work?
It is primarily the montage technique in film-making that is useful to me as a writer. The various sentences and stanzas in my poems have transitions that resemble the cuts in film. As a reader, you yourself are responsible for making the link between the various images. Another way that film influences me is that some images simply remain and resound in my memory.

What does poetry mean to you?
I need language to bring order into my life and to articulate my thoughts. Language forces itself upon me; I’m continually trying to make something that looks like poetry. Moreover, I’m fascinated by the technique of writing. I suppose that’s my analytical reflex. I wonder why some passages have an impact on me, why I consider something to be beautiful, what the writer is doing, how the rhythm works, and how various images affect the whole.

Is there one proper reading of your work?
My thoughts are always geared to something specific, they refer to reality. They are not exercises in language. Words and sentences have meaning, it’s as simple as that. Besides: language generates interesting content that reaches further than just that one sentence. When a reviewer deals with composition, rhythm and form, I think that is excellent. But I think it is even better when somebody asks: where is the writer going? 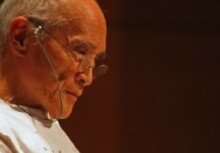 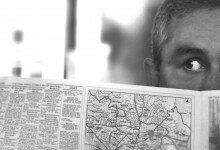