Paul van Ostaijen (1896-1928) is the most influential poet Flanders has ever produced. Every avant-garde movement since the interwar years has drawn inspiration from his work, and yet at the same time he has developed into the most enduringly popular modern Flemish poet.

Van Ostaijen gained his place in the international avant-garde canon with the collection Bezette Stad (Occupied City, 1921). Written in Berlin, it deals with life in his native city of Antwerp during the First World War. After complete translations into French and German, an entire translation is soon to appear in English (in Jacket Magazine) of this partly dadaist, partly political-activist book that to a great extent owes its fame to its inventive rhythmical typography and cynically unrivalled evocation of wartime suffering.

Much more frequently read, however, are the poems that van Ostaijen wrote after his Berlin period. ‘Marc greets things in the morning’, ‘Bersaglieri Song’ and ‘Recitative’ are among the very best-known poems in Dutch-language literature. They are playful yet also melancholic poems about the persistently intangible facts of human existence: the awesome strangeness of the familiar, the communicative isolation within which each of us is imprisoned and the social conventions in which modern man seeks to camouflage all of this.’

Van Ostaijen’s plan was to put together a selection of this work in a volume that was to have been called Het eerste boek van Schmoll (The First Book of Schmoll), the titled being derived from a piano teaching technique much used in the 1920s. The reference was not coincidental: it would have comprised mostly short poems which, in musical fashion, feature variations on a theme (lyrisme à thème is the term van Ostaijen himself used). The poet aimed to endow his poems with the lyrical naturalness of children’s songs, counterbalanced by an unfamiliar inner resonance and depth. That was at any rate what poetry was to him: “word play that is anchored in metaphysics.” His poems were intended to have something of the atmosphere and timbre of common speech and melodies – and this makes them exceedingly difficult to translate. This aspect of his work has until now limited van Ostaijen’s international fame: the fresh and yet mysterious naturalness of the originals is very difficult to transfer into other languages.

Het eerste boek van Schmoll was never published; the poet died before he had time to finish the book. Today, these poems are included in the Collected Works under the title Posthumous Poems.


Links
The posthumous poems of Paul Van Ostaijen (in Dutch)

An animation of Bezette Stad (Occupied City) (in Dutch) 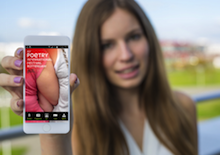