A member of the Dutch and Flemish poetry group called the Vijftigers, which included Lucebert, Hugo Claus and Simon Vinkenoog and which was closely associated with the artists of Cobra, Kouwenaar has been one of the most prominent figures in Dutch literature for the last half century. He began writing for Dutch resistance periodicals during World War II and maintained an active public voice, contributing frequently to newspapers and magazines and editing the literary journal Podium.

In addition to his trademark mustache, Kouwenaar was known for his critical and unsentimental approach to the conventions of language. Erik Menkveld, in his profile of Kouwenaar for Poetry International, writes, "Kouwenaar’s poetry is usually described as a kind of murder.” And Erik Lindner, in a recent column for our Dutch website, envisions his texts as “cut out from language with a cold knife.”

In remembrance, we link here to Kouwenaar’s Poetry International page, which includes an extensive selection of poems in English translation, and recommend reading this 2002 interview, in which he recounts the aesthetic and social concerns of the Vijftigers, as well as the need for a poetic community: “It feels good standing shoulder to shoulder.” We couldn’t have agreed more.

Something falters, one has smoked too much, flees
coughing into the orchard, autumn breathes


narrowly, silent as a bed this is, it’s silent
a mouth, only the snails on dead wood move


one would like to keep sitting here on a stone
for hours or centuries, living on a brimming 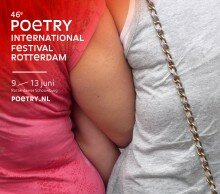