BACK TO THE BEGINNING

to forget at ever-increasing speed:
what was it again?

and so to return to the beginning of thought
which actually isn’t yet thought itself.

from Tussen de gebeurtenissen (Between the events), De Bezige Bij, 2000.

Martin Reints (1950) is an economical poet. His first collection appeared in 1981, the second in 1992 and his third, Between the events, from which ‘Back to the beginning’ is taken, in 2000. His poems don’t convey the impression of someone in a hurry, or someone constantly having to respond to impressions. He attempts to put into words something that can only be pinned down through persistent attention – and only just, even then. That does not make his poems ponderous. In fact, they are often light-hearted. As is the poet.

MdV: When does a sentence fit a line?
MR: I rely a bit on what feels right. At a certain moment, the line is full and starts to exceed the ‘normal’ breadth of the poem, no matter how variable that is.

MdV: In the first stanza you write about what is present in its ‘day-to-dayness’. Is that the same as its ‘everydayness’?
MR: Everydayness means roughly ‘ordinariness’. That aspect of ordinariness I want to retain, but in ‘everyday’ you hear the word ‘day’ less, because it is a threadbare word. ‘Day-to-dayness’ has more obviously to do with time.

MdV: The word ‘dwell’ has a temporary aspect, even though things are there every day.
MR: But it is no permanent state, because the present is temporary. Like us, it is only there for a little while. That is the beauty of the verb ‘to dwell’ [in Dutch vertoeven], since it actually means ‘to remain temporarily’ – there is something paradoxical about the word itself.

MdV: ‘Step by step' sounds completely literal. Is the intended meaning gradually, little by little?
MR: I think really that everything that happens does so in steps, in tiny jerks. I’m not a great believer in gradual developments. When I look at things, I experience a kind of rhythm in events. Everything that changes does so step by step.

MdV: The next line would seem to imply that memory is the same as yourself.
MR: That is what’s so crazy: what you are yourself, your memory is too. The two are so closely connected to each other – memory and identity. Memory changes from one second to the next, as you do yourself. That’s the annoying thing about words like this – they suggest that something is laid down.

MdV: The poem is written entirely in the infinitive form. Is that to suggest an imperative: ‘act like this’, or is it a supposition – or something else?
MR: The intention is: you can imagine that it is like this. If someone were to ask in a test: “What is the main theme of this text?”, then it is ‘leaving memory in the lurch’. By means of this grammatical form, you have considerable freedom as to how you can think about it. You can think “that is a lovely prospect”, but also “that is a terrible event”. I like that freedom.

MdV: The poem also becomes more abstract since there is no subject, no ‘I’ or ‘he’ or ‘you’ in it.
MR: Yes, it is a bit abstract. But I think that if a reader really reads the poem, he himself is also the subject of that text. It’s possible to insert an I or a he and hope that the reader will then identify himself with it, but I like not doing that as well. Besides, it is also quite difficult to write something like this in the I-form.

MdV: Why do lines 4 and 5 make up a whole stanza?
MR: Because the subordinate clause that follows is a long one, and is a more explicit explanation of “that are being worn down there”. That line of white space enables deceleration to take place. Then comes the more exact elaboration. By means of this, the text at this point gives you the feeling of thinking out loud. Something similar happens in the following verse too, the “clouds of dust” are elaborated into “hot desert sand”. This gives the text a kind of lethargy and a kind of tenacity. Although there is resumption, there is also development, one that takes place step by step. You could say that the stanza division reflects this form of development.

MdV: You talk about a rhythm and the fact that it is strange.
MR: As I’ve mentioned, I think that everything proceeds in steps, but that this is hardly perceptible. That is why I refer to it as “strange”. The word “strange” contains the meanings “odd, singular” but also “self-willed, autonomous”. What I am saying here is that the rhythm is peculiar, but that it also has its own existence. Everything wears down, but that rhythm is what lasts.

MdV: And then you suddenly let entire offices wear down.
MR: Once you’ve gone so far with all those abstractions – “things” and “memory” – you’ve got to have an image. And those bookcases full of books, which also have something to do with archives, probably led by association to office and office furniture.

MdV: And those clouds of dust led in turn to hot desert sand?
MR: Yes. Clouds of dust led me immediately to think of a desert, and the repeating sounds are nice when read aloud. When I write something, I also want it to sound good. If you write that they change “into clouds of dust, into desert sand”, something is missing – musicality demands something in between. In this case my choice was “hot”. And then of course there are the mirages. It is a representation of how the whole world changes into clouds of dust that shimmer in the heat – the poem is just as lethargic on the one hand as it is wild on the other.

MdV: You take great leaps here, from office to desert, to rivers, to new housing estates.
MR: Those leaps are actually taken. New housing estates are made out of dust, out of material that has already once done service, from clay that has settled on the river bed. The world consists of deserts and rivers, but also of offices and new housing estates. The one is connected to the other.

MdV: In the following line you combine two irreconcilable concepts, necessity and chance, with the word ‘and’.
MR: I doubt the importance of the difference. I think that there is also a pattern in chance. There is also mischief or pleasure involved in saying things that are not possible. In thought they are separate entities, but in my normal everyday existence I do not ask myself if something happens out of necessity or if it is a matter of chance.

MdV: What is ‘the beginning of thought’?
MR: Thought is the handling of memory, and at the same time memory has to be filled by thought. Thought and memory are dependent on each other. There was once a beginning when there was still nothing in the memory. Which means you can say that there wasn’t yet thought itself.

MdV: It is, to put it banally, a chicken-and-egg question?
MR: Yes, it certainly sounds highly banal, but it happens to be like that. The whole text is a result of my puzzling about memory, thought and the passage of time. Those are three things that cannot exist independently of each other. Leaving your memory in the lurch can occur in various ways: when you are old you see some old people quite literally return to the beginning, but also for example when you fall asleep, when you stop thinking. You can see this poem as a description of the temporariness of life, but also of what happens when you fall asleep.

This interview was first published in the series ‘Dichtersgesprekken’ (Conversations with poets), by Prometheus/NRC Handelsblad in 2005. 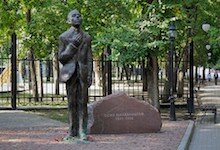 POEM
MUSICA HUMANA
[A modern Orpheus: sent to hell, he never returned, while his widow searched across …
read more ►