In 1990, the Georgian poet Shota Iatashvili published his first poems. At that time, much was at stake in Georgia: in 1989, the country declared itself independent, after which it was swept into a maelstrom of revolution, war and chaos. Against the shaky background of armed peace that sought to establish itself a couple of years later, the young artists and writers returned to their artistic life. Shota Iatashjvili joined a group of socially committed artists who gathered together their literary performances and alternative actions under the name Tbilisi Performance Theatre. The American writers’ movement, the beatniks, – with such writers as Ginsberg and Kerouac – much appealed to their imagination. In those times of upheaval, the young Georgian artists had a keen eye for what was happening in the street and they reshaped the toughness of life as it is into performance act in which the word played an important role. Iatashjvili has continued this line until the present day: typical of his poetry is the attention paid to everydayness and the eclectic style in which he describes this.

Apart from being a man of poetry, Iatashjvili is also a prolific prose writer and essayist – and his female alter ego, Diana Vatsjhnadze, also devotes herself to the writing and publishing of poetry and prose. It is striking that among all the disciplines he applies himself to, it is above all in his poetry that humour unceasingly bubbles to the surface. Iatasjhvili’s mad frenzy is modest and reticent in nature, and is subtly woven into his images, unexpected turns of phrase and the laugh with a tear, that is perhaps a symbol of the tenacity of a vulnerable poet, stands on the sideline in the commotion of everyday life.


[ Shota Iatashvili took part in the Poetry International Festival Rotterdam 2007.
This text was written on that occasion.] 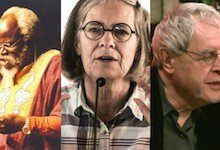