An ironic and caustic reflection on poetry, poetical forms and the “use of numbers” by Gabriele Frasca.

I do not think there ever was, outside the conventions of quarrelsome owners of pieces of land reserved for grazing, an arrogantly “closed” form opposed to an ecumenically “open” form. It would be a waste of time to talk about it: any object, especially if made artistically (in other words any artifact whatsoever), has always some kind of form (and form is always a closure that fortunately never closes, in short a self-transformation, a self-trasformation according to art), unless it is unstable on account of its very elements, i.e. speciously stuffed with liquids or gaseous substances (there are also, as it is known, water towers and castles in the air, for those used to gathering tears and sowing wind). For many, for most people actually, poetry is a flow of GABA molecules or the spurting of air out of a little balloon, in other words a cute emission of thought, which, as such, needs no form but only someone to think it and someone willing to marvel at the gushing (“how nicely it gushes past all obstacles!”) and at the quality (“what beautiful and unusual things he says!”) of that literally admirable thought. From here descends the realization of the great number of poets (and of critics who decrypt poets along the lines of “what X really meant”) that our country enjoys, compared to the relatively modest production of poetry. I mean it, in Italy there are more poets than poems, precisely because for our laudable “experts of the field” one needs first of all to be “poet” (ultrasensible and ultrasensitive, an unique tangle of fertile thoughts, a relentless weaver of synapses, or even more simply a maker of Chinese cookies) and only when this status has been achieved can one serve on the spot a few omelettes of words (they call them, verse being a audio-tactile art par excellence, “poetic images,” right? and they can deal with practically anything, it depends on the schools, currents, and coteries, from youthful years in the countryside or the glittering supermarkets of the suburbia, in any case some significant lexical choice, say “harken” or “fuck,” will be enough to mark the difference).

Form, on the other hand, is useless in itself, as demonstrated by the anonymous master author of one of the more peremptorily proverbial lines ever written and, at least in the period closest to us, more exhaustively quoted in all literature: “severamente vietato fumare” (“Smoking is forbidden”). Indeed languid hendecasyllables abound in our tradition and even the last implacable syllable-counters can claim noble descent from a prolific race (that which has made Petrarch a typography overseer). The problem, in short, is not that of assuming the superiority of traditional forms: the fact that a sonnet is a sonnet does not make it any better in itself of a free verse table. The fact is that, in spite of metricists and metricologists (used to scanning an entirely rhynodigital poetic temp to the point of inventing a “tonic” spondee if it serves to silence a verse and let them scratch their noses), the Italian meter, indeed all romance meter (aside from a certain “mutism,” a typically French cult, and the little silence that has succeeded in colonizing the typographical country), is surely more accentual-syllabic than purely syllabic, and must be appreciated with opportune movements of the lips and modulation of respiration (with a respectable prevalence, if only one would bother to adopt exhaustive tables like Russian metricologists do, of iambs and of sudden, heavy, stumbling of trochees), according to the technique that the Fathers of the Church called rumination. Only he who ruminates can digest verses and only thus is there communication (because it is a bodily struggle, or a true “manducation,” as Father Jousse would have said, or a French kiss). For those who make up verses, instead, form (not necessarily traditional ones, given that forms, as it is known, are traditionally invented) is the resistance of matter, in short the body that expands or rather, as theoretical physicists would say, a “field,” if not one’s field (as body immersed in a culture). Taking on form means then first of all be willing to feel the limit of this marvelous insubstantiality of thought (that must peremptorily incarnate itself, otherwise we wouldn’t have any use for it), or at least the impossibility of proceeding in the “aerial” way, in which from the very first it is as if this impalpable thought had as if arisen (the so-called “inspiration,” precisely). Using the witty definition with which Laurence Sterne turned himself to his readers, a poet is an extremely religious artist: he starts with an hemistich and then entrusts himself to God for the rest of the line.

Things, in my view, must go more or less like this. One has a nice thought buzzing in his head, it might be a fixation, I’m not saying it isn’t, but in any case he has it and wants to get it out like a sore bad tooth, however, he doesn’t think it is enough to announce himself, simply because he’s made in such and such a way, as a “poet,” in short he does not “feel he feels” anything more than his fellow human-beings, and therefore he knows that it would be useless to spit it out on a sheet of paper as it is, gurgling in his gullet. On the other hand he realizes that this thought of his, or fixation, has arisen because he has done such and such a thing, met such and such a person, put up with various things, read this and that and much more, stored some data and woven his neurons in certain ways, as well as having recently suffered from a severe cold and an extremely itchy eczema. Therefore he knows all to well that it would be pointless to try and decrypt in somebody else’s flesh that thought using “internal” references (the itch is felt by the person who has it!”), let alone through epochal “images” (which remain those reflecting his “own” journey through that epoch), and therefore that it would be an empty exercises to ask for the complicity of potential end-users through intricate arguments that don’t belong to them, or symbols that would be entirely opaque to them, or using possible cultural “complicities,” for example (if our author is a sophisticated dandy) the third movement of Beethoven’s Sonata 109 or (if he prefers to keep up to date) number 49 of his personal collection of Spiderman. So, if one thinks about it a little and realizes he better make this thought, or fixation, at least “sayable,” i.e., chewable by someone else (because after all it is something chewed, though not yet digested and probably impossible to digest), and finally it becomes suddenly clear to him that to obtain this result he must somehow put it in numbers, i.e. in “music” (because no one will ever be able to think his thought, at the most they will be able to hold it in their minds, like you hold a catchy tune). Let’s suppose then that this person, having decided to attach himself to the jaws and aural channel of his end-user (this another Jesuit, Gerald Manley Hopkins, demanded of his “readers”: “take a deep breath and then read me with your ears”), would “invent” a form, let’s say a verse with three sharply distinct feet with fixed accent on the second, fifth and eighth syllable, etc. etc., in other words a nice amphibrachic tripody to encage in nine repetitions of nine repetitions, and even a rhyme-word to serve as cross; he’ll end up catching it, this thought, or fixation, of his, and, in order for the counting to come out right (and the recounting of the counting) he’ll have to stretch and rearrange it, cutting here and adding there, to the point that when he’ll finally exhibit the result, he won’t be able to help realizing that he inevitably ended up saying something completely different, but at least of having said it (having made it, in short, sayable).

This, I think, is the purpose of numbers, the proper form of poetry as the orthogonal projection of the “there is-there isn’t” of the binary rhythm of matter in the otherwise meaningless chain of words: to mortify the more “literary” solipsism (suited to the silence of the typography) in favor of a more sociable singing nature (the question is putting the sheet back on their feet, since they have been suffering, at least since the advent of the age of electric media, from a tenacious form of orthopnaea). It is the well-known technique of the user-friendly (which, as a procedure that facilitates, is always in fieri), not the “preciseness” of the pumice stone mentioned by Calvino; there is nothing “precise” in all this, indeed one proceeds by approximations (“preciseness” has nothing to do with literature). But the point is that “to approximate” means to get closer, because if one is forced to come to terms with the singing nature of his work which constantly reminds him that “this has to do with it, this has nothing to do with it,” he must submit to a conventional series of idiomatic phrases, syntactical junctures, and also of necessary isophonies, which are precisely the bread and butter of the end-users (language is after all shared, like music itself, in a specific period, by a specific community), because a “poem” is not an mixture of words spurted on a sheet… nothing is “mute” in a poem. The techniques of meter (and of music) originally developed for memory, and are therefore a support for information, a medium (indeed they represent the first medium for the transmission of non-genetic information), a machine in short that leads people to reproduce synapses (remembering is modifying one’s body). What those who make up verse want is precisely this: to attach themselves like parasites to the other one’s body… this is why if prose glides and at the most caresses, verse, precisely when it starts counting, cuts. So it happens, for example, that a great prose-writer is suddenly struck by the painful realization of the alternation of birth and death, of this incorruptible generational clock, in his life (and in that of others, consequently) and feels then the need to give up for a while his vertiginous post-Homerical and precooked constructions to dangle on the spot the most hackneyed melancholy iambic hiccup:

And it can happen that another one, anyone, is struck by this marvellous banal music that becomes engraved, tic tac tic tac (with even the grisly proleptic “an old man gone”) forever in his cranium. Numbers, as the Latin well knew (who stretched them to signify what the more sophisticated Greeks called “rhythms”), pulse in the ear like a blood flow, and become attached, I think, to the metametrical cubes of the mind… as long as one’s reference culture does not prefer to grow deaf-and-dumbs on the little fields on which stands the little town of the page.

It is certainly time to honor Aharon Almog, as his daughter Eliana suggests in her …
read more ► 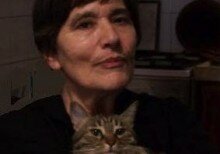 For the first time in the history of PI's Israeli domain, we are publishing a …
read more ►

“I love him very much,” says Lilach Netanel, the scholar who discovered …
read more ►

POEM
THE MAPMAKER’S SONG
The mapmaker downed his tools. I’ve caught it, every alley, every …
read more ►

POEM
GOOGLE EARTH
We started in Africa, the world at our fingertips, dropped in on your house in …
read more ►

The word Belgian is generally used to talk about world-famous beer and chocolate, …
read more ►

ARTICLE
Admire one another!
Benno Barnard
Does Belgian Poetry Exist? (2)